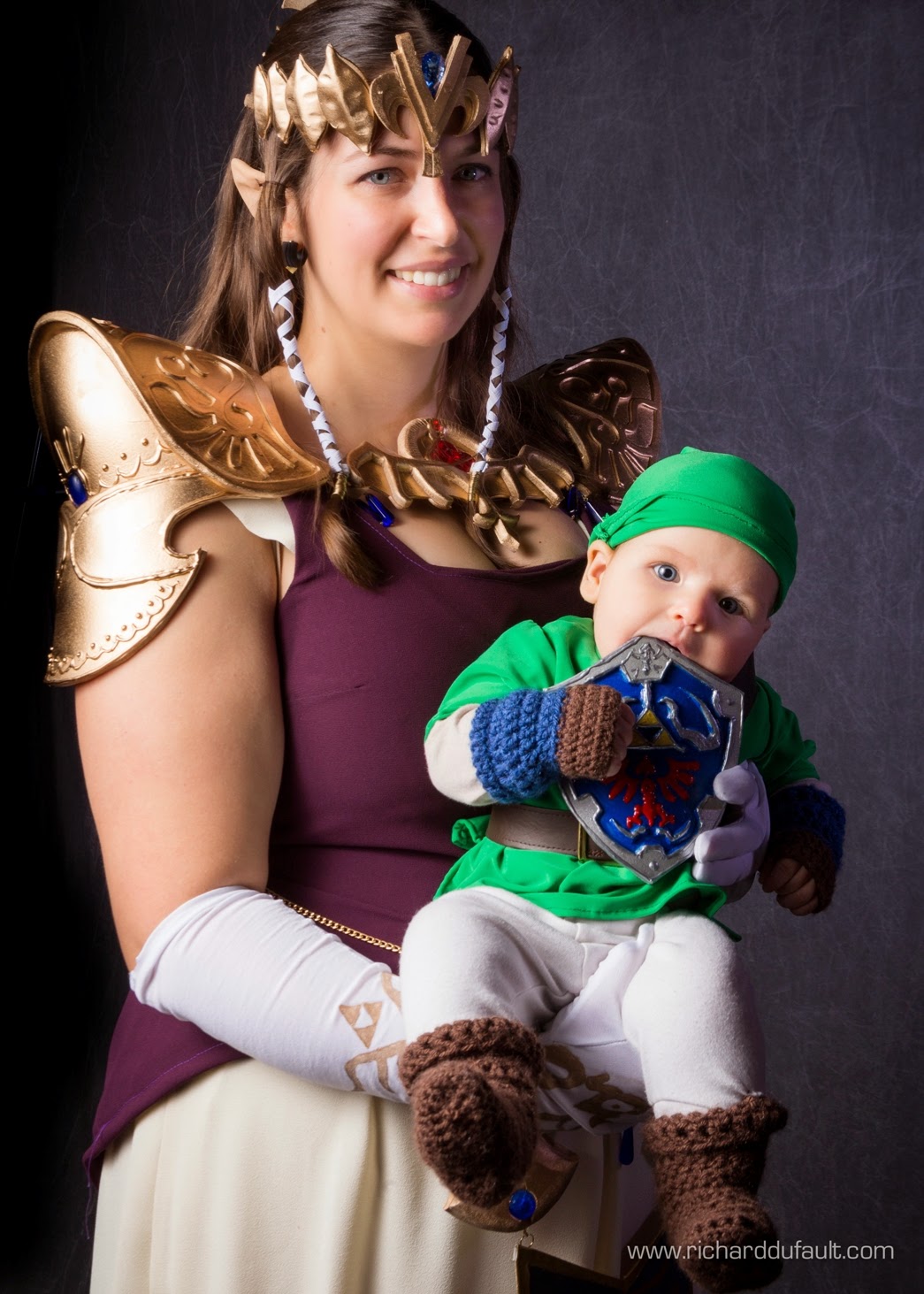 <DISCLAIMER> Soooooo last weekend was G-Anime, and when I popped on here to start working on my Con Report, I realized I hadn't posted this Pop Expo Report yet! Ooops! Imagine that this is around January first.... And go! G-Anime Con Report coming soon!</DISCLAIMER>

Hey peeps! Merry Belated Christmas and a Happy New Year! Hope you all had a fab time and got all kinds of fun and geeky wonders under the tree. It turns out we had a very Zelda Christmas, as not only did hubby and I gift eachother with Zelda stuff (I gave him a Link statuette and he gave me a ceramic ocarina), but the tree was bedecked with just a hint of geekery, with a collection of Link's swords and shields strewn about the branches, and Link himself on top watching over the festivities!

Another Con has come and gone, leaving me with great memories and the usual task of tracking down all the photos floating around the internet from the cosplay of the day - it's taken a while and I've found a few, but I keep feeling like there are more out there because the world LOVED my sweet Baby Crankypants in her itty bitty Baby Link cosplay, and even when I didn't have her on me, Princess Zelda drew enough photo requests and complements in her own right!

Alright, down to business! Ottawa Pop Expo 2014 was the second edition of Ottawa's smaller pop culture con - it's kinda like Comiccon's little bro, meant to have a broader focus on all aspects of pop culture fandom as opposed to just comics - though Comiccon is ALSO way more than just comics. Like last year, the celebrities were more on the B-List side, but still solid. This year, mostly because I didn't cherish the thought of possibly dealing with a cranky baby in public for two straight days, I forewent booking a table and just picked up tickets for Lord Crankypants, Big Sis Crankypants and I to attend Saturday.

So come Saturday morning, following my whirlwind week of nose to the grindstone working on Zelda in every moment that wasn't dedicated to childcare or previously scheduled social commitments, I had let enough details fall by the way side and had been prepared to let Zelda's wrapped braid things go that way too - the plan had been to pick up some hair at Sally Beauty to pre-wrap and clip in, but I hadn't had the time to go. Luckily, Big Sis Crankypants brought me to my senses and helped me execute a quick elastic wrap job - and I love how it turned out! Next we applied the ears, coloured them with foundation to make them look less sickly pale, and I gave myself a quick eye makeup - Taa daa! Once Baby Crankypants was fed and dressed, we were ready to go!

The setup was a little different from previous cons, instead of stepping straight into the dealers room
when entering, the line for the main stage made up half the first room while the other half was taken up by the food court. Masquerade sign up, instead of being tucked in a corner was in another room entirely, as part of a new cosplay corner thing the organizers were trying out, not that I found out first hand as I wasn't going to compete - waiting around for the Masq would make a long day unbearable when you have a four month old along for the ride. That and with so little time to work on her, Zelda really wasn't my strongest effort to date, so I didn't feel confident enough to have her judged. Also, Artists Alley and the autograph area were in the room far on the end where the food court and an auxiliary panel area had been last year - this meant that I totally missed Artists Alley on my first few rounds, and that I ended up having to rush it by the time I got there, as my con companions just weren't in to slow browsing by the time we got there.

I had taken the time before the con to look up the panels I was interested in and made myself a schedule... which I ended up completely ignoring. I had really wanted to hit Johnny Junkers Q & A at noon, but since we were a little late arriving at the con, we were barely half way through the dealers room when noon hit. The other one I was thinking of checking out was Cosplay on a Budget, but by 3:00 pm we were pretty much done (it's tiring carrying a 13lb infant around all day!) and I had still wanted to get some professional photos taken! Because Capt Crankypants couldn't make it out (something about it being his girlfriend's birthday... pshhht) and Baby Crankypants was already starting to stretch certain parts of her Link costume I ended up sizing up the available photography booths.  Vert Photography was my first pick as I loved the free shots they were doing last year, but their big selling point is using green screen to superimpose the subject over various awesome backgrounds... but none of the backgrounds really fit the feel I was going for.  I ended up going with Richard Dufault (in spite of needing to run to the ATM in order to pay for the shoot) and loved the shoot. Richard did a great job and was super patient trying to get BC's attention and suggesting different angles. My only regret from the shoot was that her hat was on sideways (seam was supposed to be at the back) and that the brim wasn't properly flipped up.  Also, my grinning was a little uncharacteristic of a princess whose realm has been overtaken by twilight, but that's neither here nor there - who can help but grin with such a cute little Link in their arms?

That said, these certainly weren't the only pics taken of us - we tended to generate a certain amount of commotion everywhere we went! I only have a few of my own - I didn't bring my camera as I didn't want to force my poor packhorses er, hubby and sister to carry that as well as the baby's things! As per usual, there were quite a few cosplayers from Legend of Zelda games, but 99.9% of these were Link, and bucking the trend from the last few cons, I didn't notice a single other Zelda out there! The remaining .1% of LoZ cosplayers, however, were extra awesome - First up, a gorgeous Imp Midna! Loved the headpiece, and her makeup was so even! And second - a freakin' guardian from Skyward Sword! How awesome is that!
By the time we finished our little photoshoot, we were all pretty well bushed, and Baby Crankypants was overdue for a good long nap! Our purchases were pretty limited, Lord Crankypants found himself the LoZ:TP Ganondorf statue for $150, I picked up a pair of Triforce earrings for $10 (though discovered later that they were poor quality... had to add jumprings to even make them wearable) and Big Sis Crankypants picked up a WoW Horde logo necklace to convert into a keychain.

Overall, I enjoyed Pop Expo again! I'm hoping they'll have a third next year, but it did seem a little... sparsely populated. There weren't as many booths, and there weren't as many people - don't get me wrong, there were still PLENTY, but the crowds were nothing like Comiccon. Hopefully next year I'll be able to have enough time to put together a costume well enough in advance to hit the Masquerade! 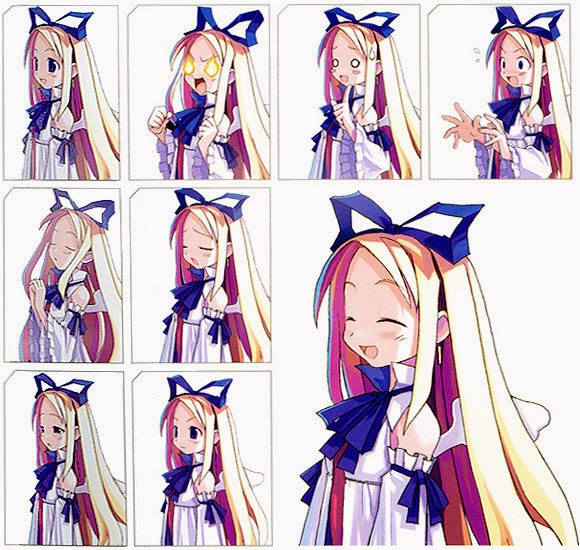 Anyway, our next con is G-Anime, coming up at the end of the month!! Lord Crankypants isn't big into Anime anything, so now that Big Sis Crankypants is in Ottawa, I finally have someone to accompany me! Both of us are HUGE Disgaea fans, and she asked for my assistance in putting together her very first Cosplay - her favourite character, Flonne - and who better to accompany Flonne than an itty bitty Baby Prinny? At this point, I'm not sure I'll have the time to put together something for myself, and helping Big Sis make her cosplay perfect is my main priority.... buuuuut I may have some silly ideas for what I'd like to do if we DO have the time!! Next time, I'll tell you all about it! And sooner or later I'll get back to tutorial writing with instructions on how I threw together my Zelda in only one week - stay tuned!
Posted by Lady Crankypants at 18:33

Lady Crankypants
Average shift worker by day (and night) gamer and lover of all things quirky the rest of the time, our heroine hails from the beautiful capital city of Canada, where she lives with her wonderful (and thankfully patient enough to put up with all her silly obsessions) husband.