<edit> This was written last weekend and I forgot to post it.  Ottawa Pop Expo is now TOMORROW, and the costume I wrote about at the bottom of the post is (almost) finished, and looks pretty darn good for only a week's worth of work! More later... </edit>

Hey internet peeps! Time flies when you're having fun, and damn is it ever flying - Baby Crankypants is already 4 months old! Halloween is already two weeks in the past at this point, but I had a great time getting things together for my munchkin, as in TWO costumes, one to match my Robin, and something new for Halloween AND Pop Expo - which means I need to make one so I can match her!

I'm sure it's no surprise that Halloween is my favourite holiday, eating candy, carving pumpkins into neat and intricate designs, and of course, dressing up in fun costumes - heck, it's that love of costumes that got me into cosplay in the first place! The big difference this year (aside from having someone small and cute to dress up alongside me) is that in February the hubby and I bought our first house - which means I could finally carve pumpkins and hand out candy! Another bonus with  having a house was that we have a little extra space, allowing my dear sister (remember, the one that REALLY likes Moria?) to come to the big city and look for employment opportunities not afforded in the small town where we grew up - and she's also on hand for assisting in baby wrangling and conspiring for pumpkin carving - where our mutual love of Moria took over!

After searching the city for a good spot to find pumpkins (the prices and sized BOTH sucked) I realized my backward logic and headed to the country - where I paid $7 for three sizable pumpkins, one of which was large enough to fit a small child (and yes, we tested this theory by plopping my daughter in it)!  Big Sis Crankypants took on the biggest of the three, doing what she does best, and drawing a lovely picture of Moria and his brick batties, then carving it out.  I tackled the other pumpkins with my dremel clone to give Moria MORE brick bats to keep him company, and voila! Pumpkins!


We got great feedback from the neighbourhood residents, both young and old, though our efforts paled in comparison to the AWESOME Doom themed gourds that OTHER Big Sis Crankypants (younger than the first, but only by a matter of minutes) painstakingly dremel'd back home.

Anyway, so baby costume  #1 - big shock, a sweet little Batman to go with my Robin! It was super quick throw together for a party that was built around her Batman onesie - got a little one you want to turn into a Baby Batman? 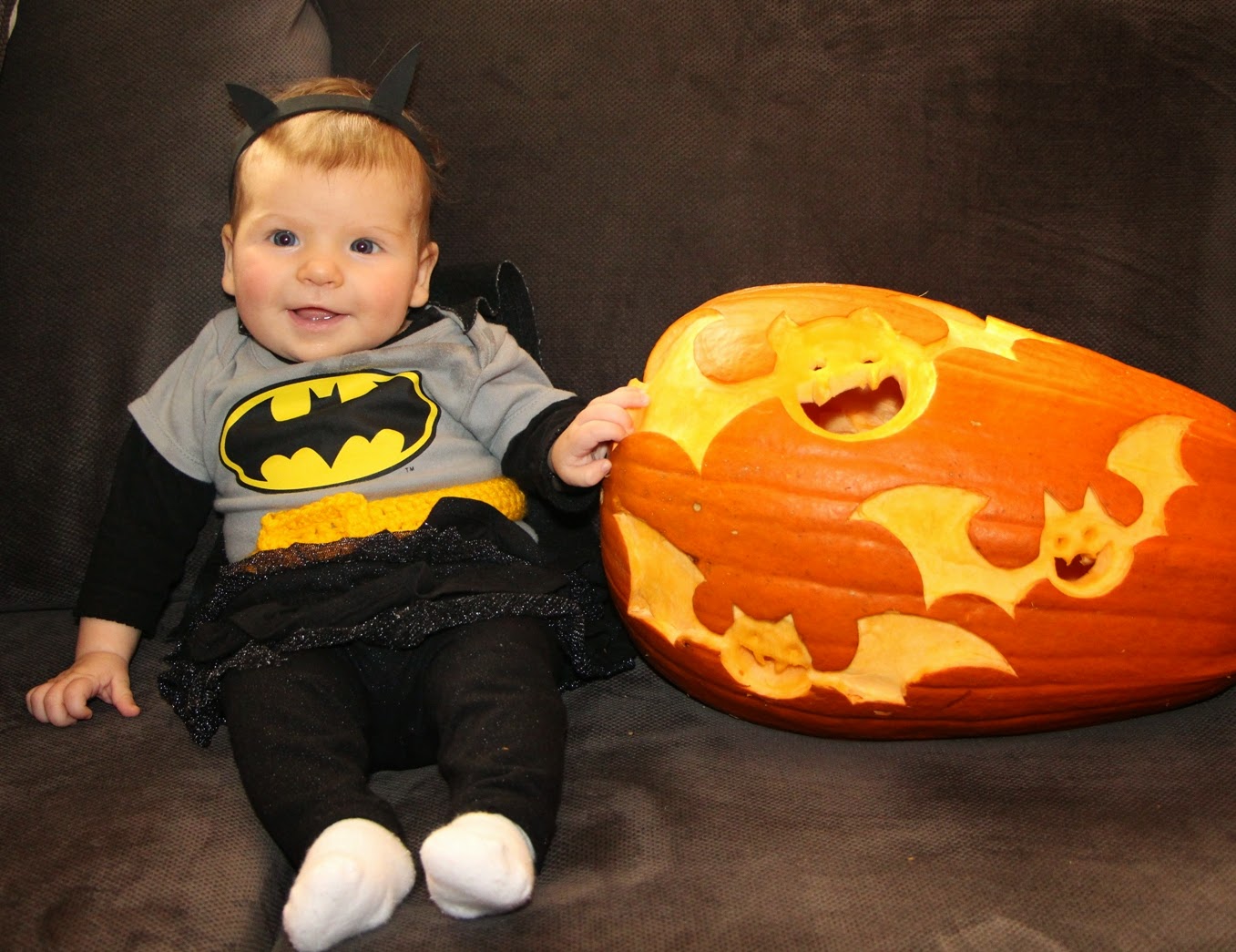 Onesie/cape - Don't have a Batman onesie (or don't feel like paying $12.99 for one)? Find a plain gray onesie and add the logo using the techniques in my tutorial to Customize Any Piece of Clothing. To make the cape, lay out the back of the onesie on a piece of bristol board and trace half of the neckline, then straight down to the desired length, throw in a few curves, and back up to the neckline diagonally. Fold the felt in half, and place the pattern on the fold, and cut out the cape! Pin in place along the back of the neckline and sew (by machine or hand) - done!

"Cowl" - Obviously a baby wouldn't be willing to wear a cowl for any extended length of time, so I made a little ear headband out of craft foam. The band was approximately 2 cm wide and 3 cm longer than the circumference of my daughter's head. One end was made into a little arrow, and a small slit was made at the other end to insert the arrow and complete the circle.  The ears were made in the correct shape with arrows just like the end of the band, and two slits were made in the right spots on the "top" of the band, and the arrows were pushed through slits! The headband stayed in place nicely AND she didn't mind wearing it one bit!

Belt - I crocheted my Baby Batman Belt, but if you don't crochet, it's easy enough to make one out of craft foam!

Craft Foam - Measure your baby's waist, and make a band in the desired width in the same manner as the band for the "cowl" above, but leave a little space as it babies are wiggly. The buckle can be cut out with an xacto knife, then slide the band through the buckle, and put the arrow through the slit around the baby's waist, then slide the buckle over the break in the band to hide the join.

Since this isn't field tested, I can't guarantee how long it will stay on for, but it should work for a photoshoot at the least, and may actually stay on well!

Crochet - Crocheted in 4 weight yarn with an H8/5.00mm hook, and totally made up as I went along - here's an approximation, but please understand I've never written a pattern before, hope it's legible:

make a chain long enough to go around the munchkin's waist, then sl into first ch to make a circle

ch 2, dc in each ch around and sl into the top of the ch 2 - repeat until your belt is the desired thickness (I hit 3 rows)

The buckle gets tricky, so I made a diagram, though I'm not sure if it will help any! In each frame, the blue symbols are the current work, and the black are past work.

ch (enough to get across the belt) and sl into the bottom
ch 2 (to make first dc) and dc in each ch back across, sl into top
ch 2 and dc flo across to the desired width, cut and work in end

Attach at bottom, and repeat the same steps to complete the rectangle!

I know it's kinda wishy washy, but it allows you to customize it to the baby in question!

Putting it together - Probably obvious... but! Long sleeve black onesie on the bottom, then black tights (unless there's a skirt attached, like my little lady's), then the Batman onesie, followed by socks, headband, and belt! Taa-daa! You have your own little Baby Batman! To complete the look, add your own Robin costume, and voila, Parent/Baby Halloween perfection!

Alright, I know, what could compare? Baby Crankypants'  Pop Expo costume, dubbed Babby of Time by Big Sis Crankypants, I give you - Mini Link! I lovelovelove how this costume came together! The original concept came about when I was working on her Hylian Shield Zelda onesie back before Father's Day.  I had the template for each piece of the Hylian shield, so I cut each piece out in craft foam, intending to surprise Lord Crankypants with a mini-shield to add to his prolific collection of Zelda stuff, and for us to photograph the munchkin with during her newborn shoot!  Weeeellll, that never happened, and the pieces just sat around in my craft room waiting for a higher purpose.

Finally, with Halloween looming I got to work! Since I had a lot of sewing to do, I put the shield together, shaped, sealed, primed and sprayed it silver, then got my sister to paint it while I worked on the rest. This is as far as I got by the Halloween engagement where we debuted our tiny Link! I'll post more about my Mini-Link and how to make your own in the future.  With Ottawa Pop Expo coming up on November 22nd, I had already given up on finding the time to finish my Gaige, so I had decided that I wouldn't worry about getting a costume together for myself... then went back and forth for a whole ten days.  This led to an inevitable identity crisis, something about being only a "Mom" and no longer the person I was before, and finally I gave in and resolved to get to work on a Zelda costume for myself!


Aside from time (well, I guess alongside time) my biggest challenge will be battling my perfectionism - I have resolved to aim for recognizable rather than perfectly accurate. I chose Twilight Princess Zelda as I was using Twilight Princess Link to model the little lady's costume after, and decided to dedicate my time to the most identifiable and unique parts of the TP Zelda version - her banner, jewelry and armour. Instead of trying to sew something together in just 12 days, I picked up two dresses, one ivory and one purple to modify, and have already tracked down some lovely long gloves. I've already sewn the banner and painted the background colours (that ombre blue/gray was a PAIN!) - now all I need is for this weekend's house guests to go home so I can get back to work! The clock's a-ticking, keep watching to see how much work I actually get done before Pop Expo!

Hope all is going well out there in internet-land and that the rest of the world had an awesome Halloween! Next time I'll post about Pop Expo and maybe share a little on how to make your very own Baby Link costume!
Posted by Lady Crankypants at 20:31

Lady Crankypants
Average shift worker by day (and night) gamer and lover of all things quirky the rest of the time, our heroine hails from the beautiful capital city of Canada, where she lives with her wonderful (and thankfully patient enough to put up with all her silly obsessions) husband.